Starling, by VersaMe, is a science-backed wearable device that can boost brain development in young children. Research has proven that the number of words a child hears throughout the day strongly predicts future vocabulary, IQ, and emotional well-being. Starling keeps a running count of spoken words through direct verbal engagement.

Closing VersaMe's first partnership with the State of South Carolina

The research is clear: children learn language based on how much their parents talk to them. At the core what VersaMe was trying to achieve was to use technology to help parents engage more with their babies in the first few years of life.

I joined as a generalist but grew into a product strategist.

I made by way to VersaMe by way of the Venture For America Fellowship. Reporting to the CEO, I'd work on all things from corporate partnerships, to website design, to fundraising materials. But in the few months after joining, it became clear our direct to consumer approach wasn't working and I pivoted to developing and launching a B2B product strategy.

After leading 110+ customer discovery calls, I learned that for an early education provider, specifically a librarian, the Starling was a tool that not only helped them improve the effectiveness of their programs, but it empowered them in the eyes of their stakeholders. We sourced, nurtured, and closed $224,000 in first year of launching B2B business.

I learned that before anything else, talk to your customers.

VersaMe built incredible technology, raised a lot of funding, and assembled a world-class team. But in the end, very little of that mattered because what we were building, people didn't really want. Talking to your customers, before you start a company and while you're building the business, is the best thing you should be doing. 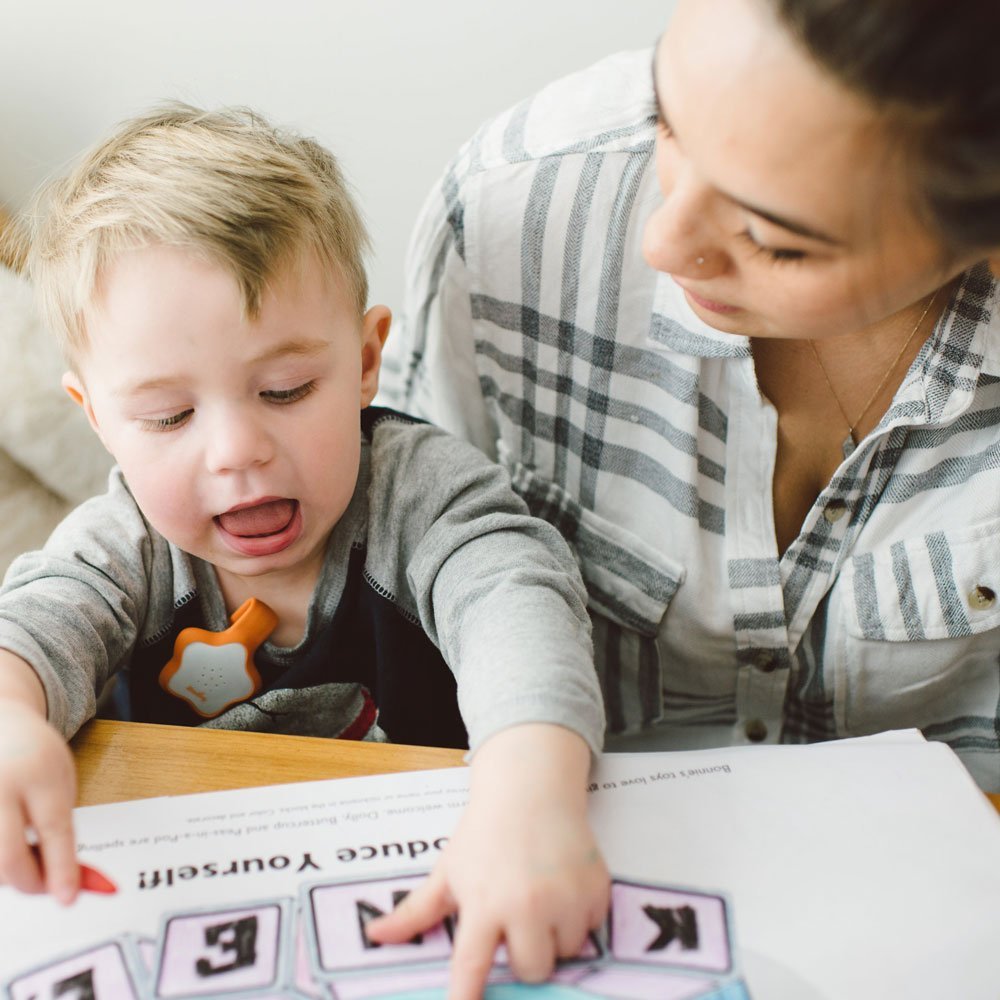 In American, formal education starts on the first day of kindergarten. Conventional wisdom has it that up until the point your child begins to speak, they're essentially a house plant that needs to be cared for. But decades of research that has recently come to light show that's all wrong. Instead, education really starts on the drive home from the hospital.

Before a child turns 3, roughly 80% of their brain is already developed. Yet in the United States, only 30% of babies from 0-2 years old are enrolled in a formal developmental program. The number goes up to 65% of children by the age of four. We as a society are essentially dedicated resources at non-optimal times in a child's life.

The research is clear: children learn language based on how much their parents talk to them. Early talkers who start out ahead tend to stay ahead—some 20-month-olds talk more than children twice their age. The sooner a child talks, the easier it is for parents to talk back, leading to even faster language development and a larger vocabulary. The problem is that while a baby does little more than a house plant, it can be really hard, and tiring, to keep talking.

By the time a child turns four, 82% of their brain has been developed. By Kindergarten, or the conventional beginning of a child's education, its 90% developed.

At the core what VersaMe was trying to achieve was to use technology to help parents understand that they are their baby's first and most important teacher. By doing so, you'd empower parents to give their baby's brains what they need the most in the first few years of life: verbal engagement.

Finding a market for a new technology.

Coming in from the Venture For America Fellowship, I joined VersaMe as a generalist. Reporting to the CEO, I'd work on all things from product strategy, to website design, to fundraising materials. I joined shortly after VersaMe closed a $10.5M Series A and the sole focus was growth. We had a manufactured product, we had inventory sitting in warehouses, and all that mattered now was defining, and winning, a market.

I jumped straight into managing a $70,000 monthly budget for paid advertising while also building the pitches for big box retail partnerships. But after a few months of very little traction, it became clear that direct-to-parents was not the right audience. VersaMe, and the Starling, was not solving a direct problem for parents and it was time to rethink our strategy. 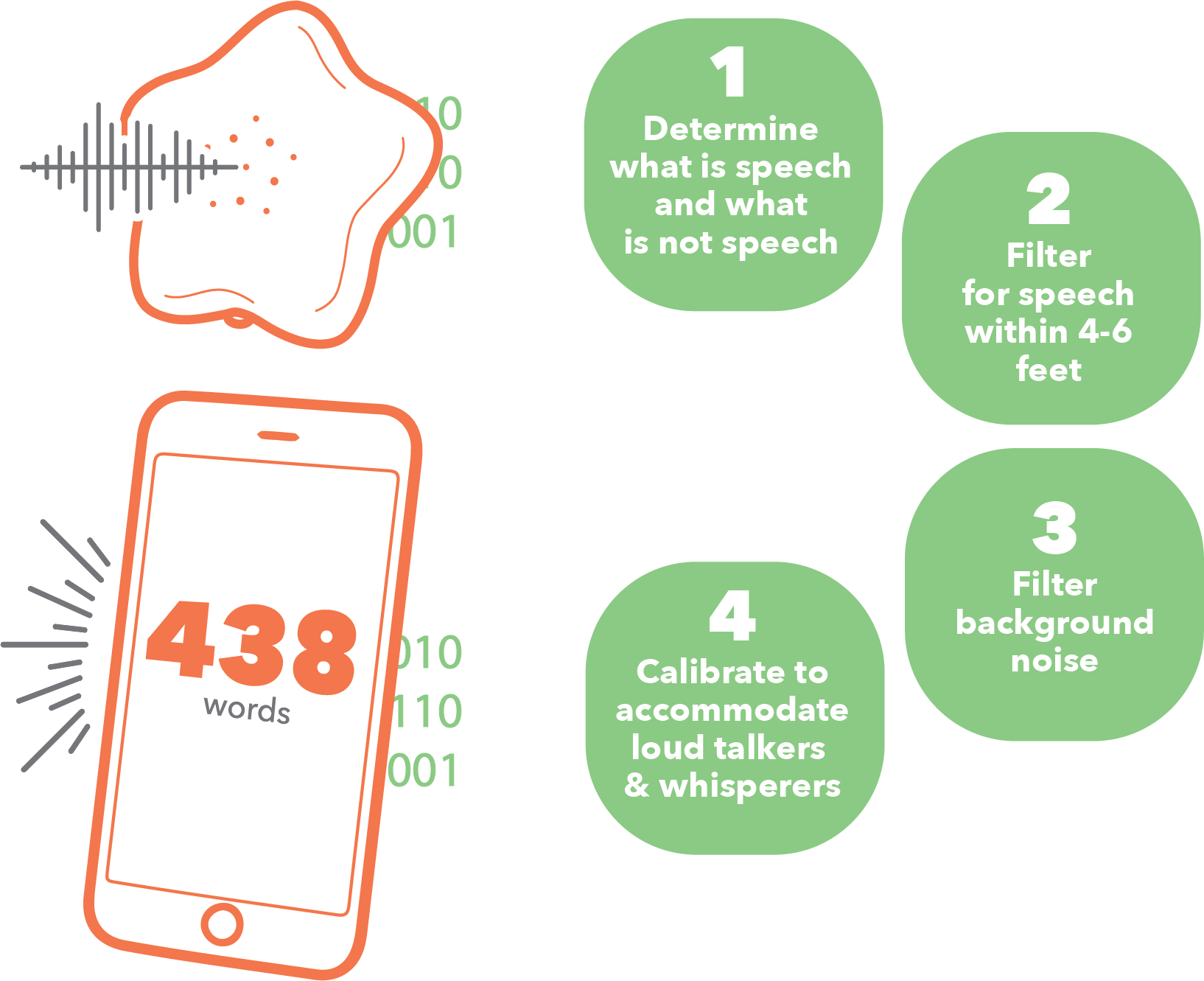 When sales and traction begin to stall, it's typically a good idea to speak with your customers. When VersaMe was founded out of Stanford, a successful Indiegogo campaign instilled a sense of confidence that parents really, really wanted this product. But speaking to parents after D2C efforts were failing, it became clear that parents didn't really understand the point of the product. Why is talking to my baby before they can talk back that important? Turns out the research that defined how important talking is wasn't conventional wisdom. Because of that, parents didn't understand that the Starling was a tool to help you engage more.

After hundreds of customer discovery calls, we learned that for an early education provider, the Starling was a tool that not only helped them improve the effectiveness of their programs, but it empowered them in the eyes of their stakeholders.

With this in mind, we followed the research. We spoke with early education researchers, the likes of Dana Suskind, who reaffirmed that while the Starling had incredible potential for changing how we define early education, we had to get it in the hands of the people who understood that value.

So we built a few scripts that scrapped the internet for any lead related to early childhood development. Government-funded First Step programs, local libraries, Reach Out and Read coordinators, State literacy programs, OPTION schools, hospital pre-natal departments. We built a wide list, triaged, and then got to calling.

Along with the CEO, we locked ourselves in a room and started cold-calling. Speaking with different organizations to understand the inefficiencies in their programs and how they were looking to improve their programs via technology. Eventually, after hundreds of conversations, we learned that while parents balked at the Starling because it ran the risk of judging the quality of their parenting, for an early education provider, the Starling was a tool that not only helped them improve the effectiveness of their programs, but it empowered them in the eyes of their stakeholders. It helped their work and made them look good.

Soon enough, we closed our first B2B sale with the Greenville Public Library in South Carolina. We found specifically, for libraries, the Starling was a hit because it empowered the librarians who were already trying to get their parents to read more to their babies. It was used during their story-telling times and they could rent out the device to parents to use at home. 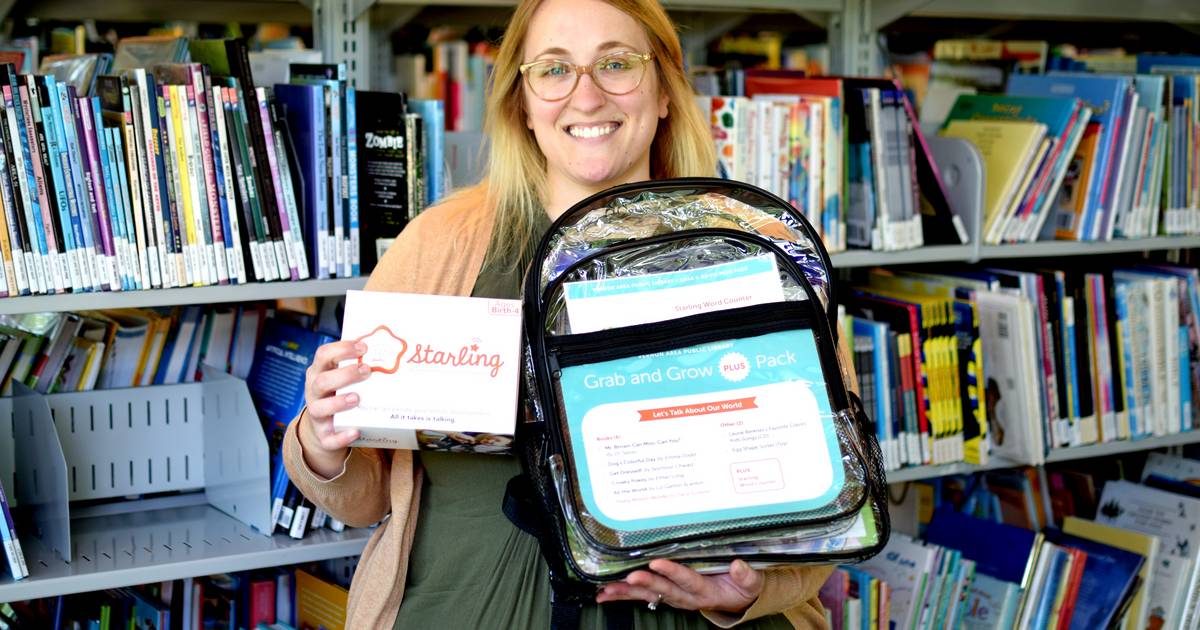 After closing our first library sale, it was off to the races. With libraries as our toe-hold into partnering with early-education providers, we soon starting approaching state-funded early literacy programs with a similar pitch: the Starling can help you prove the effectiveness of your programs. Our first win came via the State of South Carolina's First Steps program where we sourced, evaluated, and closed an $82,000 trial contract. Over the next 12-months, we'd go on partner with 58 partners from the Weingarten Children's Center in California to Save The Children in the United Kingdom.

Our first big win came via the State of South Carolina's First Steps program where I sourced, evaluated, and closed an $82,000 trial contract. 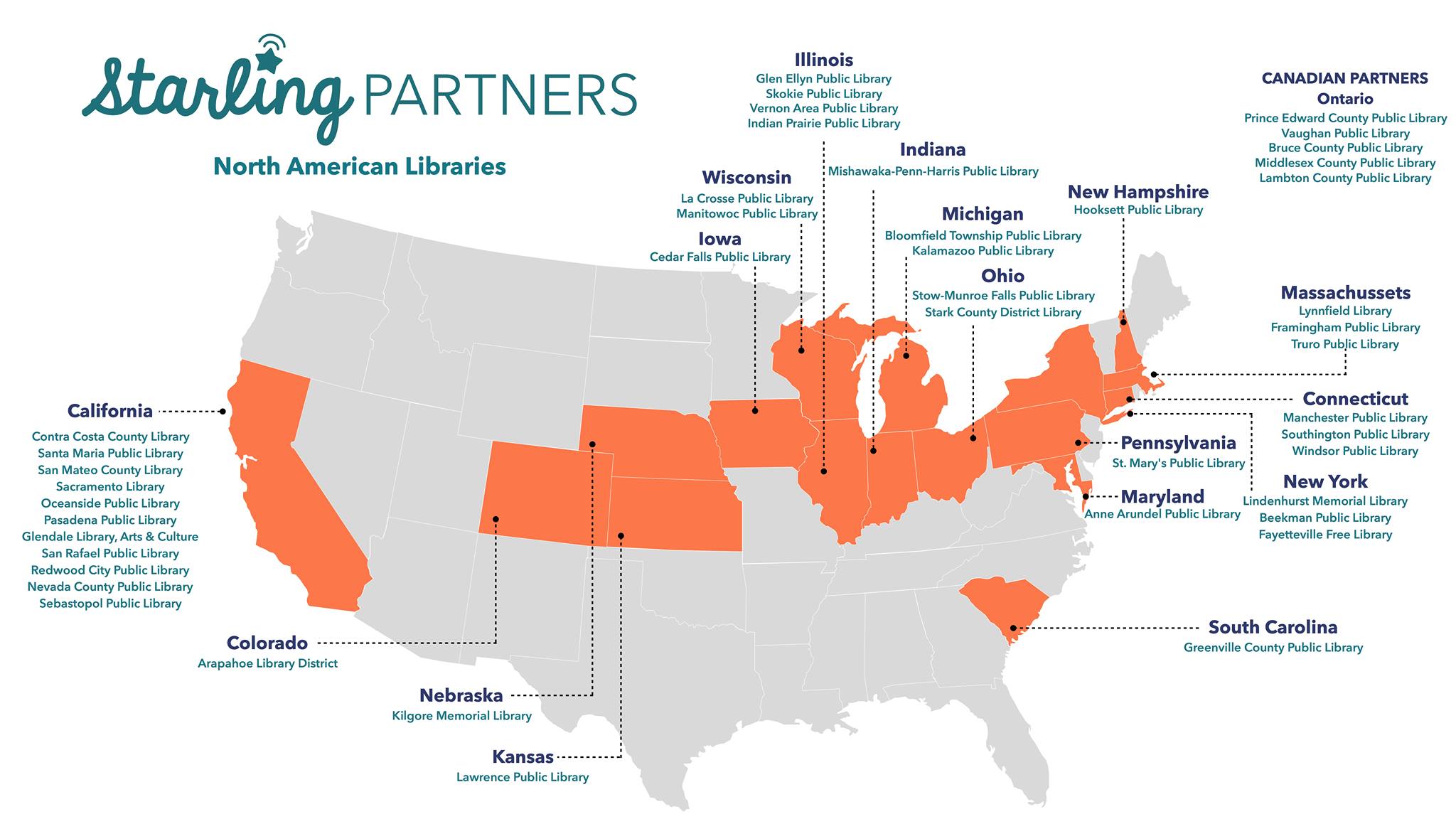 While the Starling Partners program was experiencing sustainable growth, it wasn't good enough to match the growth needed for a venture capital exit. The VersaMe founders started the company with an ambitious goal: systematically change early childhood education and in the process become a billion dollar company. While we were on pace to become a million dollar company, the founders didn't see a path forward to meet their goal, so they decided to try and sell. I worked with the CFO to design and build the entire pitch deck that was sent to the M&A teams at companies like Apple, Microsoft, Amazon Alexa, and Pierson's Education. See the entire deck here B. 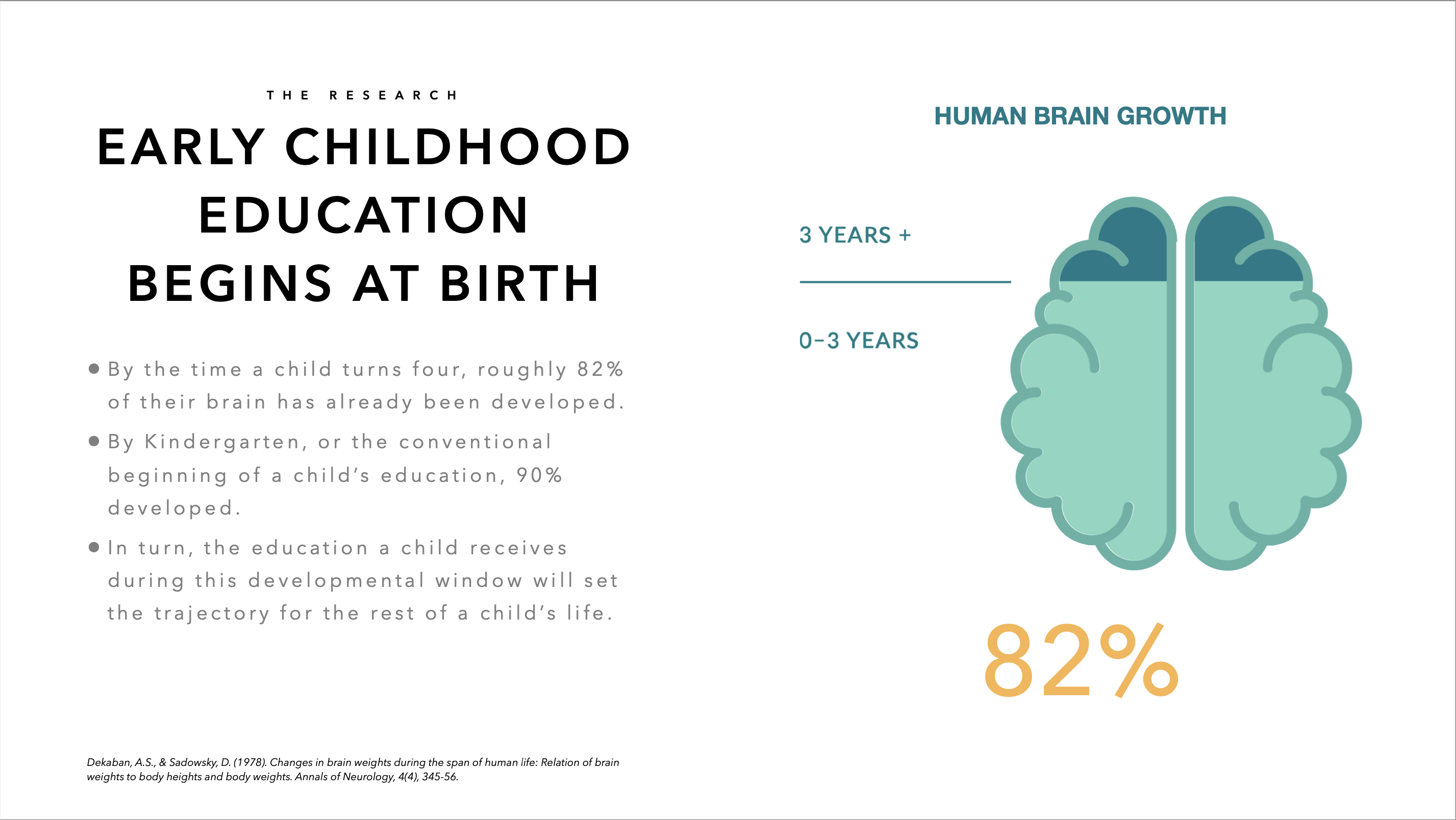 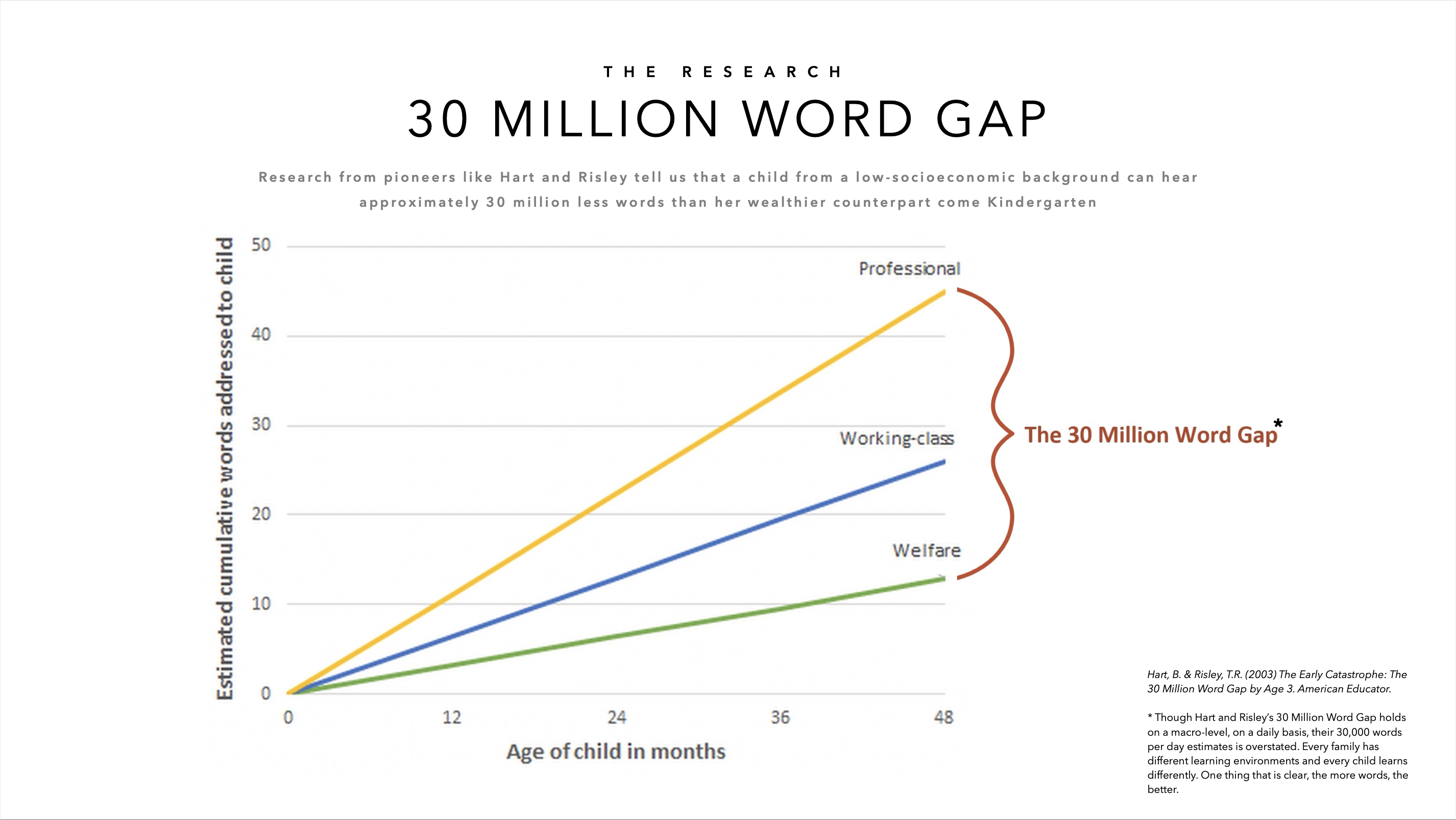 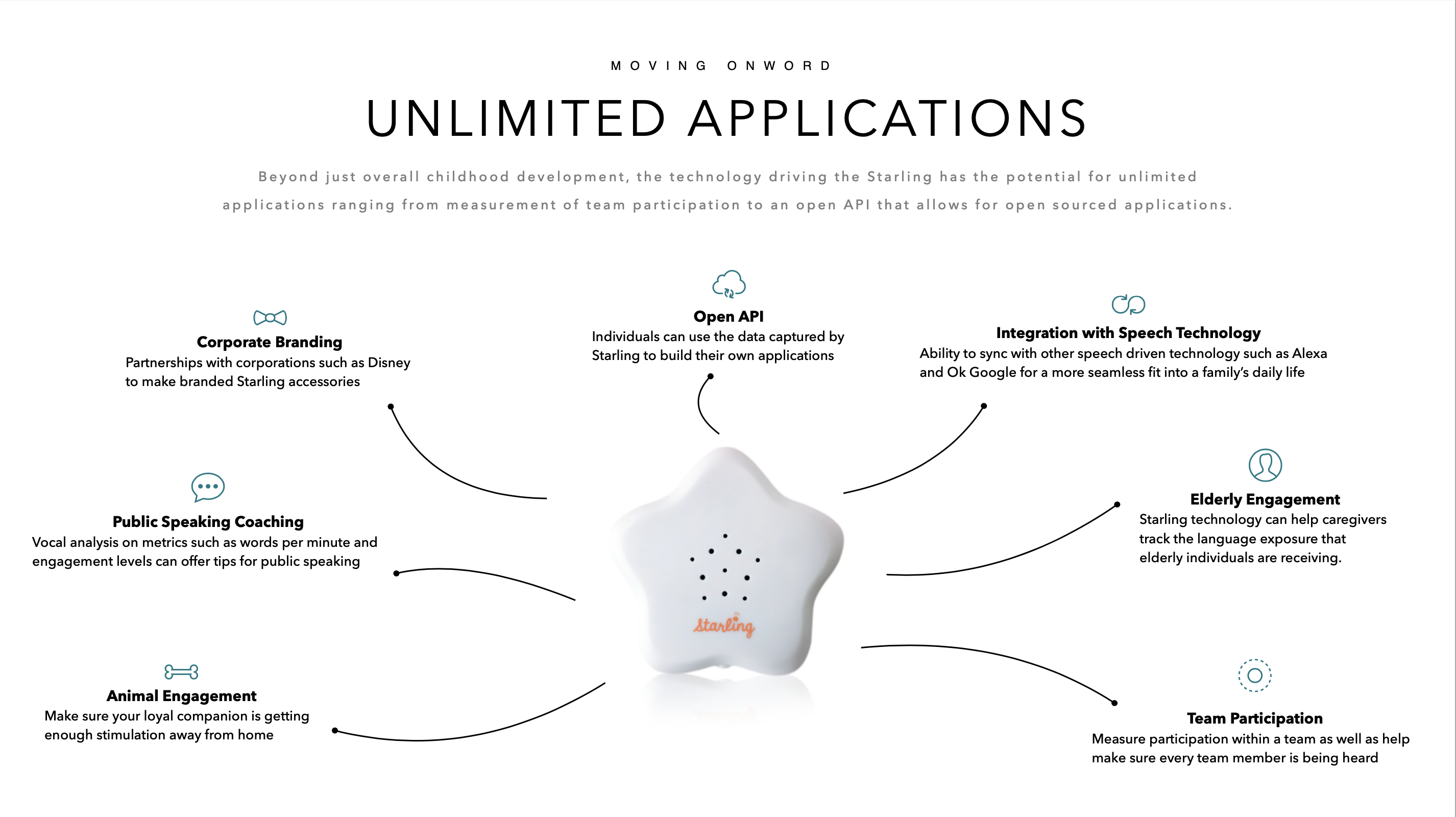 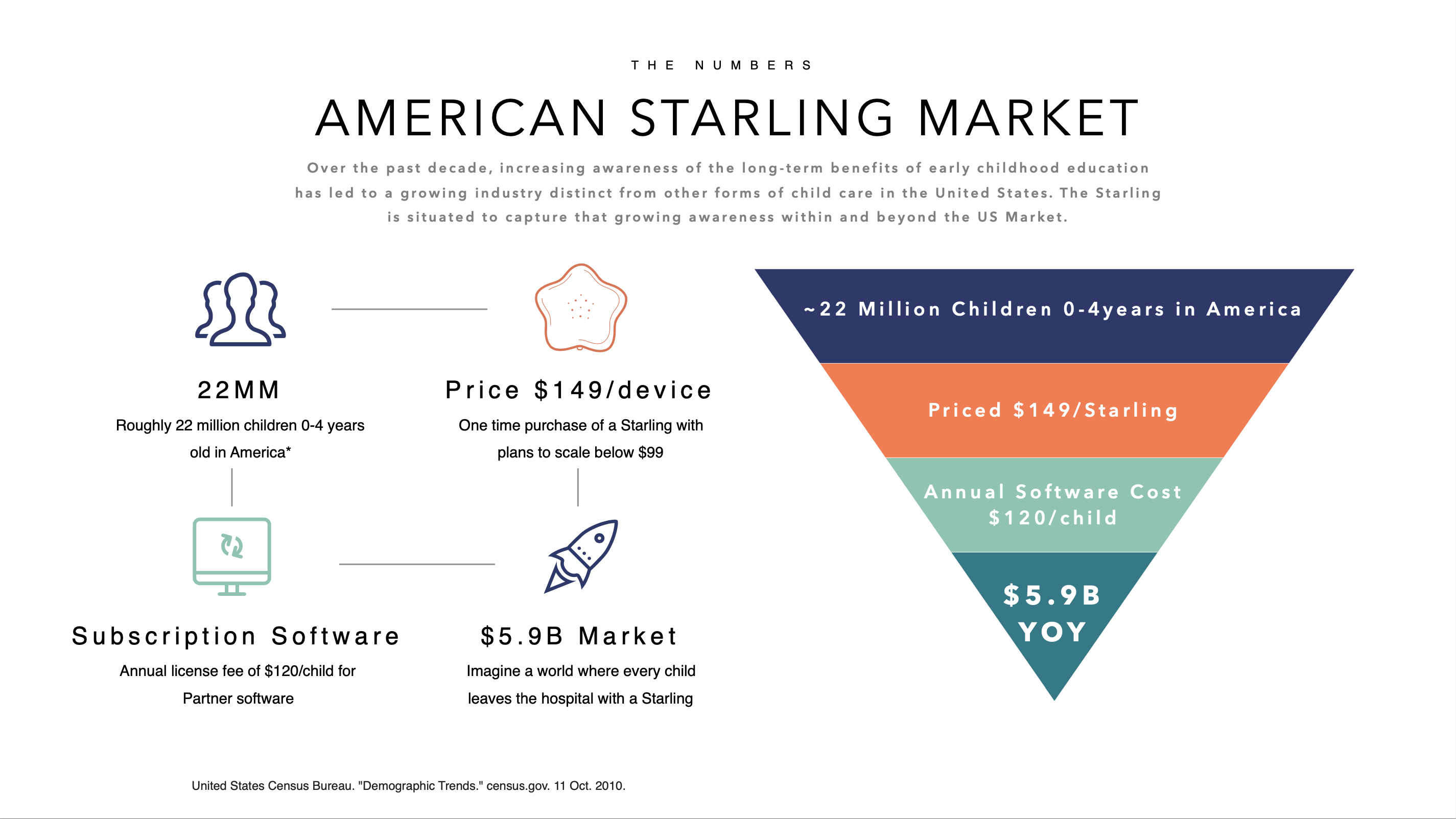 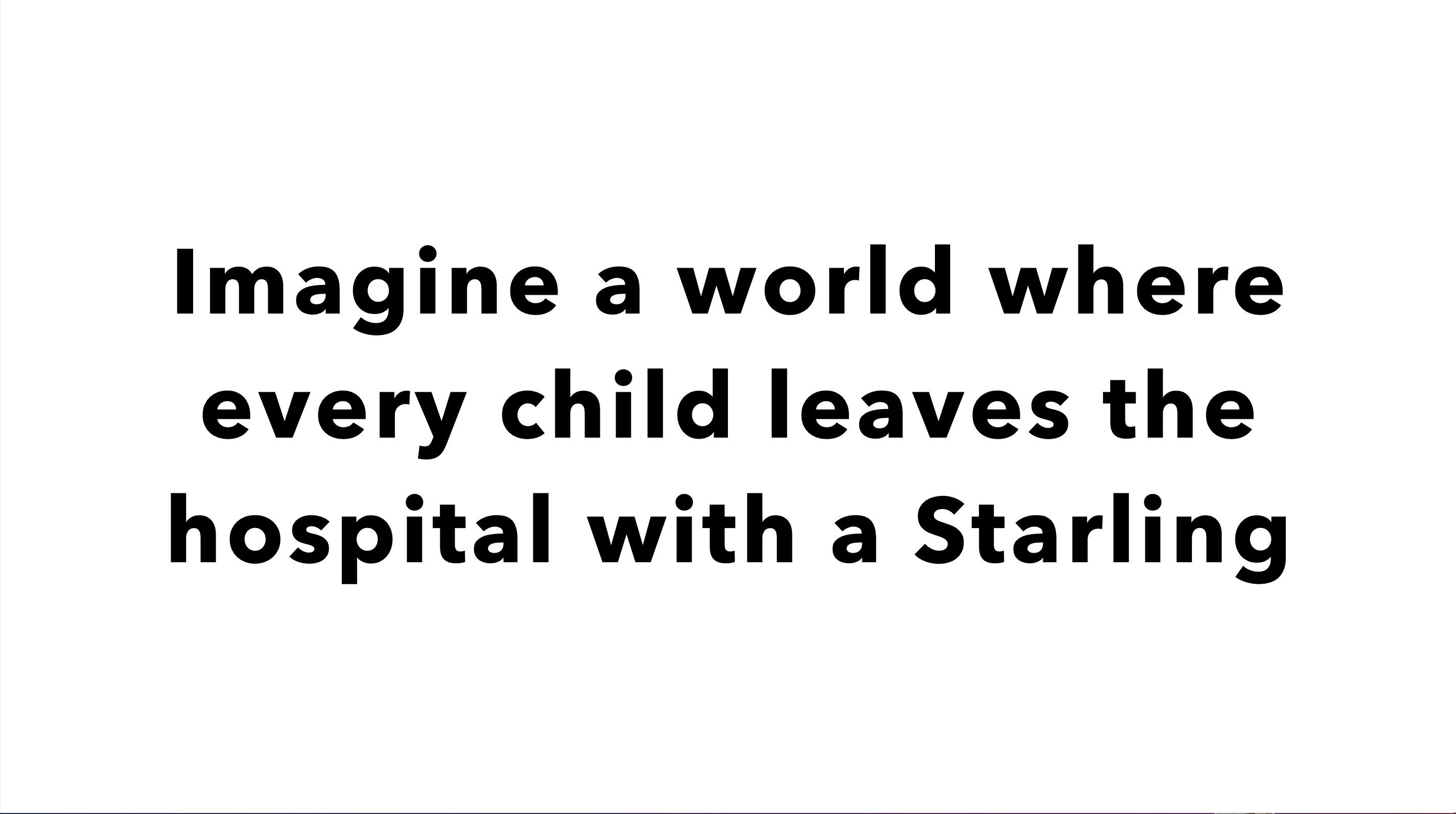 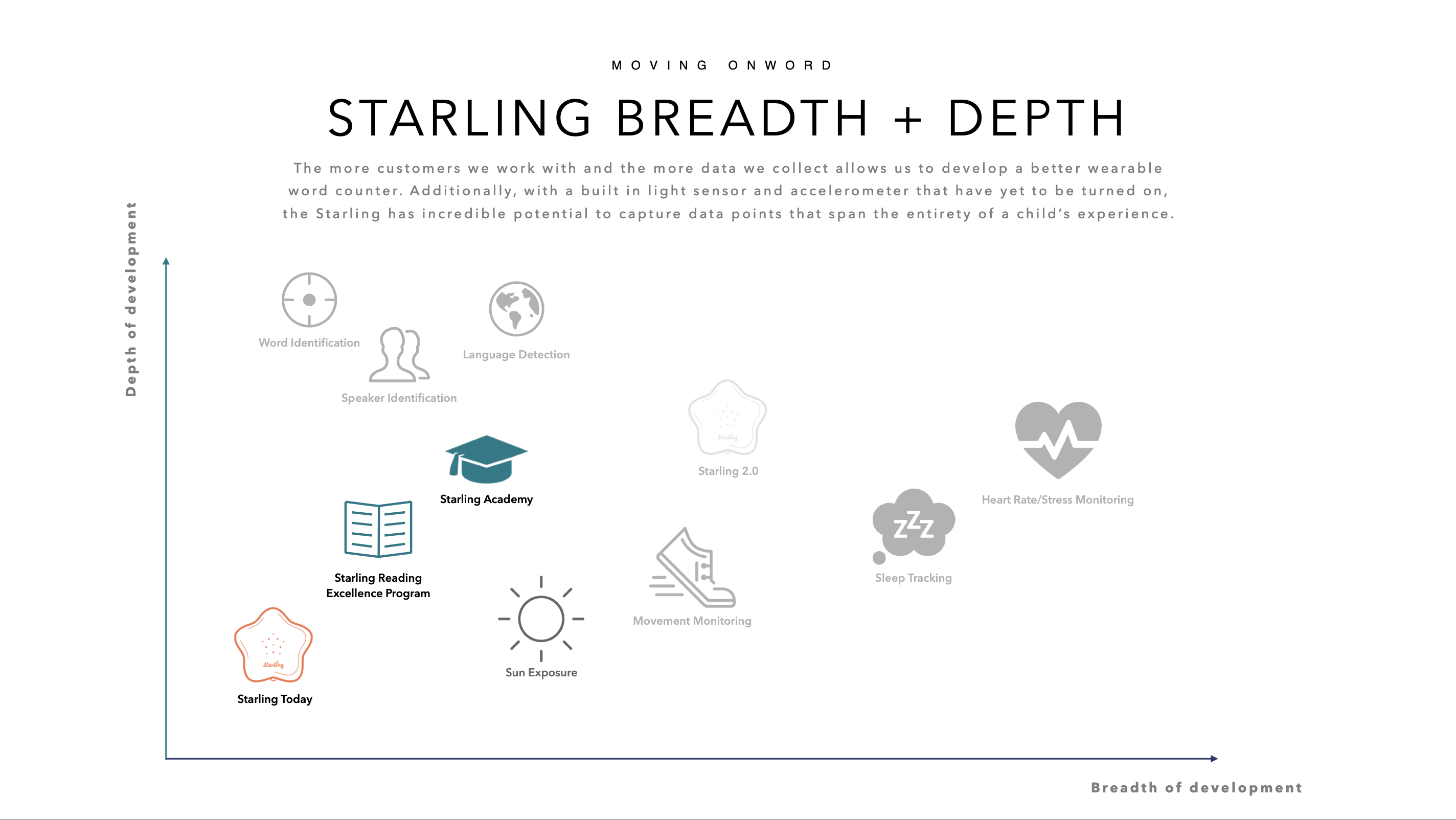 Takeaways from working at VersaMe

Before anything else, talk to your customers.

VersaMe built incredible technology, raised a lot of funding, and assembled a world-class team. But in the end, very little of that mattered because what we were building, people didn't really want. Talking to your customers, before you start a company and while you're building the business, is the best thing you should be doing.

Hardware is hard. Customer discovery can make it easier.

In building hardware, you're forced to consolidate as many improvements into each version build. We had to get as much feedback as possible on a glitchy v1 in time to design and build it into a v2 and that's a tricky thing to do when you don't know exactly what the product should accomplish. Doing as much customer discovery as possible before a single spec is designed can save you time and money later on.

Great people can keep you at a company.

I loved the people I worked with at VersaMe. I initially joined the company because of the opportunity to work alongside the founders and soon came to realize I had plenty to learn from everyone at the company. I was far and away the dumbest person at the company and that was an incredible experience. Even when VersaMe began to stall, it was the people that kept me engaged and motivated. Optimizing for the right people can take a company very far. 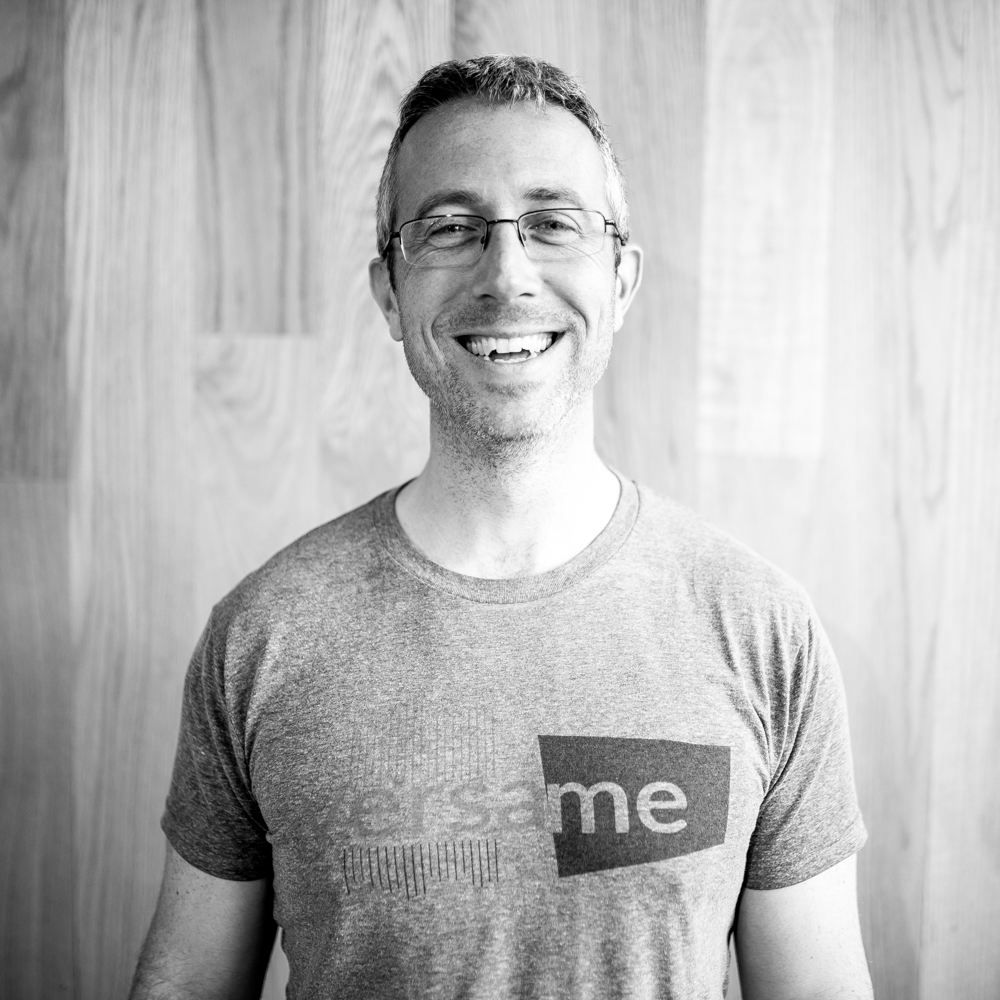 Very simply, Shea is the best I’ve ever encountered of hundreds of people who have worked for me. He was one of the first people I hired after raising $11 million in venture capital funding. At the time, he knew little about hardware or data science, but he has tenacity and the smarts to figure out any problem thrown at him. I hired him for those attributes, and he exceeded my expectations. 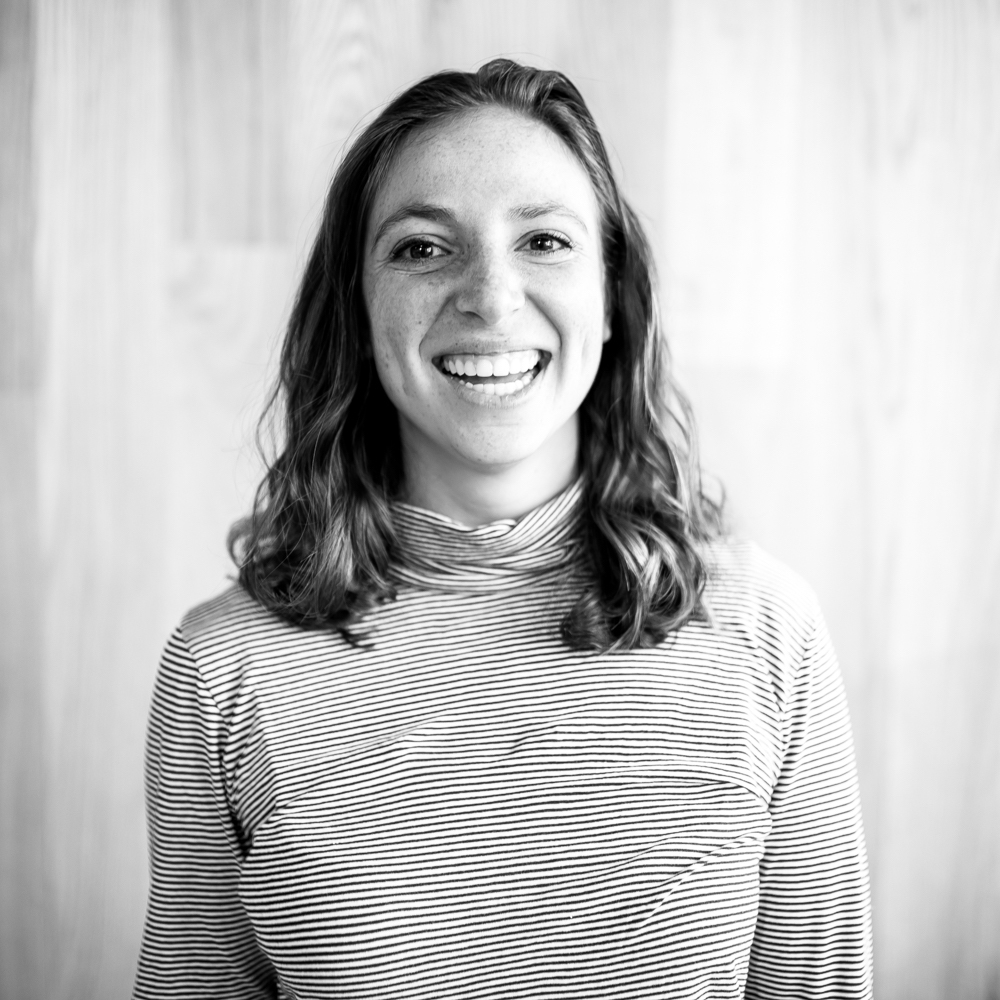 Shea is an amazing colleague! He created such an open environment in our work together—he's an incredible team player, as well as creative, quick-thinking, and strategic. 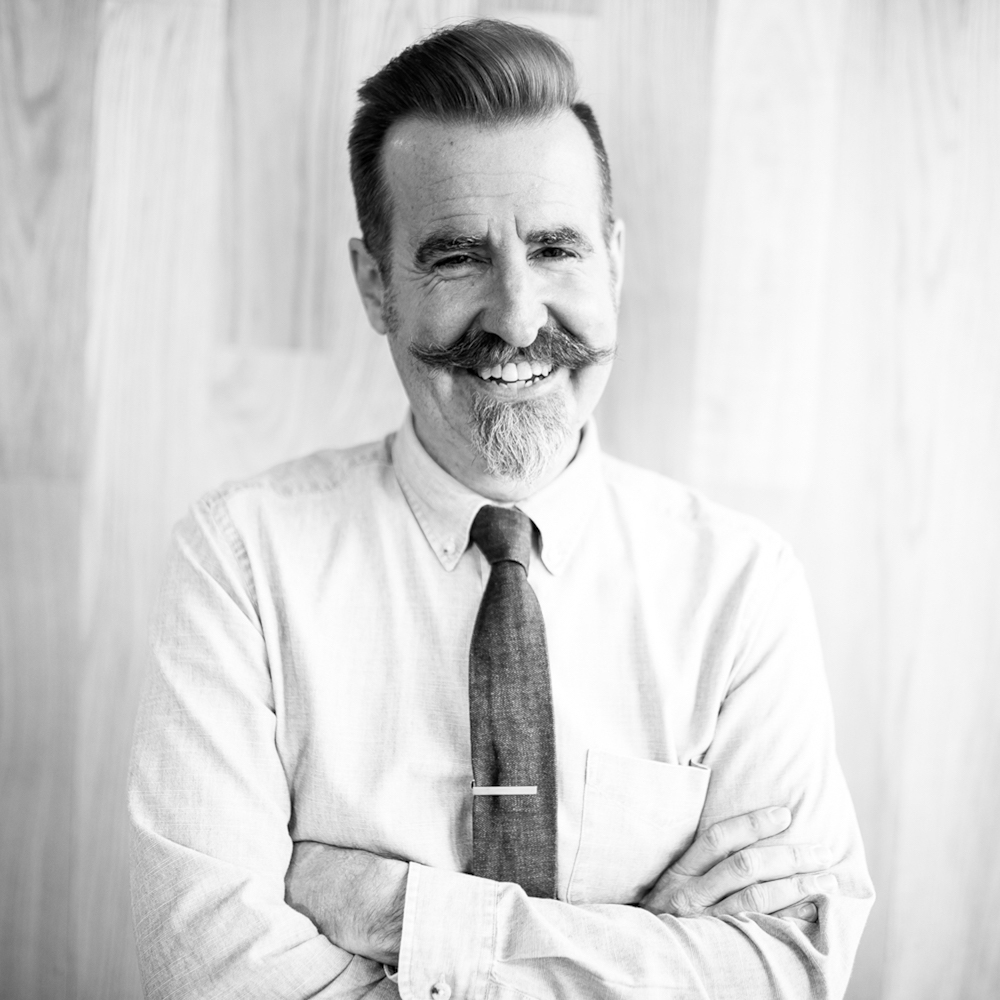 I love how Shea actually engages and thinks all around an assignment. He’s a smart, multi-talented problem solver.

Next Work Experience
‍What's for lunch?